Graphene is a “super-material,” with the potential to change history like the bronze, iron, steel or silicon of past eras.

It is a two-dimensional material, only one atom thick, consisting of sheets of carbon atoms bonded in a hexagonal pattern.

Scientists first hypothesised its existence in the 1940s, but it was not until 2004 that Konstantin Novoselov and  Andre Geim were able to create it from graphite and study its properties.  They won a Nobel Prize in 2011 for their work.

Since then, graphene research has exploded with a vast number of patents taken out as markets and industries prepare for a disruptive Age of Graphene.

What are graphene’s extraordinary properties? 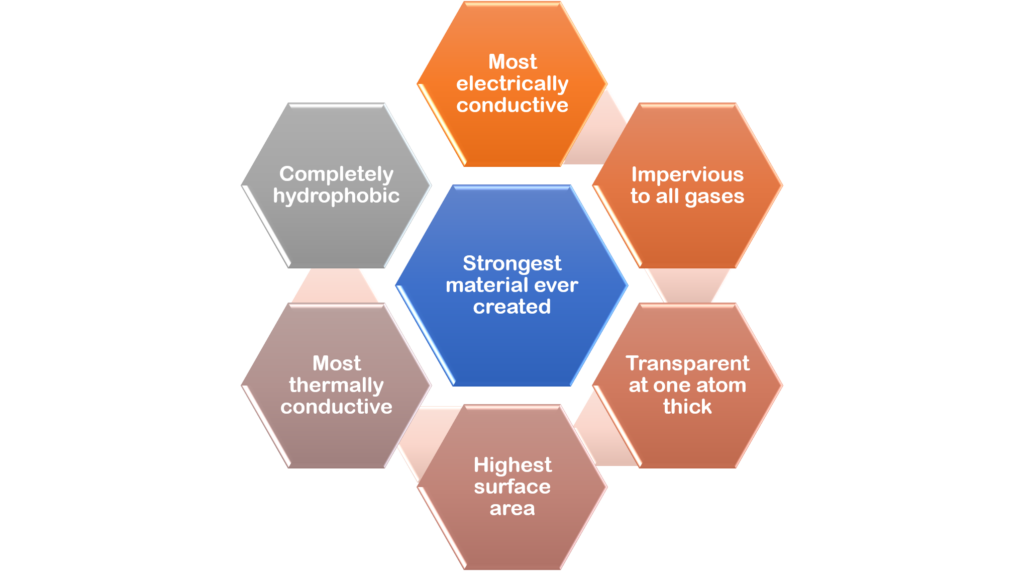 What is graphene used for?

Actual and potential applications of graphene continue to grow, limited only by current research, development and testing.

Current applications for graphene already in play include the infusion of electrical conductivity in plastics and glass and the production of composite materials such as carbon fibres, plastics, geo-fabrics, coatings and paints with impermeable and anti-corrosion qualities.

Graphene has the potential to create the next generation of electronics currently limited to science fiction: faster transistors, semiconductors, bendable phones and flexible wearable electronics. It could be a part of your wall paint – simply flick a button and a section becomes a screen. Even
conductive inks, tattooed into your arm and powered by your own body’s heat and movement, will be possible.  With new uses being dreamed up for graphene every day, from indestructible condoms to filters that
can remove pollution from the atmosphere, it’s good to know that the processes for creating graphene have a low environmental impact.

There is a vast range of other potential applications including:

Two applications, addressing some of the world’s greatest challenges, with enormous market potential, and where Ionic is focused are water filtration and energy storage.